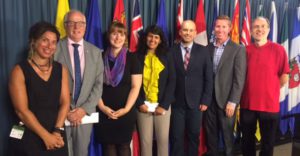 At a press conference in Ottawa today advocates released an open letter to Prime Minister Trudeau signed by over 170 organizations and prominent Canadians urging the Prime Minister to make good on his commitment to the right to housing by enshrining that right in upcoming National Housing Strategy legislation.

The letter was penned by Amnesty International Canada, Campaign 2000: End Child and Family Poverty in Canada, Canada Without Poverty, the Canadian Alliance to End Homelessness, housing and homelessness researcher Emily Paradis, and the Social Rights Advocacy Centre. Supported by the UN Special Rapporteur on the right to housing, the letter outlines key requirements of right to housing legislation consistent with international human rights law.
"We've come together to show the Prime Minister that there is broad-based support for legislated recognition of the right to housing and to offer a way forward," said Tim Richter, President of the Canadian Alliance to End Homelessness. "Canada's housing and homelessness crisis is the result of a failure to protect human rights. If we're serious about fixing this crisis, then Canada must live up to our international human rights commitments and have a legislated right to housing as the foundation of our National Housing Strategy."

Every year over 235,000 people experience homelessness in Canada. Today, over 1.7 million Canadian households are living in unsafe, unsuitable, or unaffordable housing without better options available to them. These households are disproportionately led by women and feature overrepresentation of Indigenous peoples, people with disabilities, immigrants and refugees, youth and older adults, and members of racialized communities. All these people are experiencing the effects of a systemic crisis - a failure to protect and implement their human rights.

"Canada has an opportunity for international human rights leadership with a clear, decisive and unambiguous commitment in legislation to the right to housing," says Leilani Farha, UN Special Rapporteur on the Right to Adequate Housing. "The National Housing Strategy made an historic commitment to progressively implement the right to housing; what's needed now is legislation that ensures meaningful accountability to that right."

Draft legislation prepared by legal scholars and civil society experts is also available. This draft legislation offers suggestions on how the right to housing could be incorporated into the proposed National Housing Strategy legislation, consistent with international human rights law, and including mechanisms through which people affected by homelessness and inadequate housing can bring complaints about systemic violations and require the government to respond.